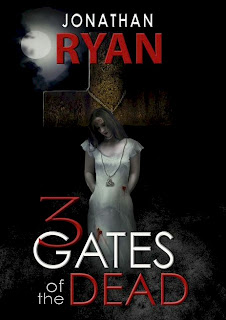 Sometimes, the most evil things come from the most holy…

Conflicted with his faith in God and the hypocrisy of the church, Aidan Schaeffer, a young assistant pastor, is in a constant state of spiritual turmoil. When Aidan learns that his ex-fiancée is the first victim in a string of ritualistic killings, he finds himself in the middle of an even deeper fight. Tormented by demonic threats and haunted by spirits, Aidan throws himself into investigating Amanda’s death; all the while supernatural forces have begun to attack the people around him. The more questions he asks, the more he is drawn into the world of a mysterious Anglican priest, a paranormal investigation group and a rogue female detective investigating the murders. As the gruesome rituals escalate, ancient hidden secrets and an evil long buried threaten to rip Aidan’s world apart.

Have you ever dreamed of a shot at becoming a film director in Hollywood?
Here’s your chance…

Jonathan Ryan is an author, columnist, blogger, and theologian. His debut horror mystery novel, 3 Gates of the Dead (October 2013), has earned multiple rave reviews including Midwest Book Review, the Director of Development of The Wolper Organization at Warner Bros. (Bates Motel, Mists of Avalon), and a TIME Magazine reviewer. He grew up poor in Indiana and spent two weeks every summer with his grandmother, who allowed him to check out library books on Bigfoot, the Mothman, and ghost stories. He explored all the dark and spooky places of the Midwest, including the mysterious mounds that dot the landscape there, developing a love for the weird, scary and strange. Jonathan’s adventurous spirit has led him to live in many states and travel the world. He has given much of himself in an effort to help others, many times at his own risk. He was mistaken for a member of the IRA while encouraging dialogue in Belfast between Protestants and Catholics before the Truce. He has worked among the Navajo and Tohono O’odham nations as well as brought together a group of atheists and Christians to contribute to relief efforts in Biloxi and New Orleans after Hurricane Katrina.